The 7.62x39mm is the caliber shot in the AK platform including the AK-47. The 6.5 Grendel is a popular cartridge on the AR-15 platform. There has long been a debate about the AK-47 versus the AR-15, and comparing cartridges is a major part of that conversation. The 6.5 Grendel is generally better for long-distance and precision shooting, but the 7.62x39mm is less expensive with a manageable recoil. 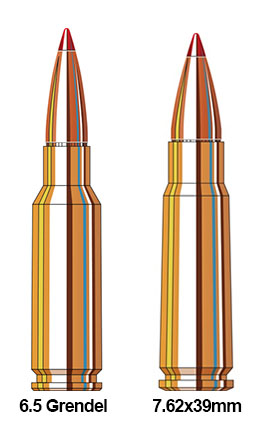 The following ballistics table show a side by side comparison of the 6.5 Grendel vs 7.62x39MM based on bullet weight and various performance metrics including velocity, energy, usage and recoil.

Thanks to its higher velocity and energy, the 6.5 Grendel also shoots flatter over longer distances. It has a maximum effective range of 800 yards, while the 7.62x39mm has an effective range of only 400 yards. This is partially because the 6.5 Grendel has a narrower bullet, which means there is less air resistance as it moves toward your target. The 7.62x39mm has its best accuracy within 200 yards of the target.

The 7.62x39mm can be used in home defense applications thanks to its high energy and manageable recoil, and many shooters just enjoy the feel of it at the range. However, it is simply not accurate enough for applications in hunting. With the 6.5 Grendel, you have the accuracy necessary for hunting medium game at short to medium distances, as well as target shooting.

In addition, the 6.5 Grendel can be found in bullets ranging from 90-129 grains, giving it a wider range of applications.

The 6.5 Grendel has been in the lead in most categories, but it does offer a more significant recoil than the 7.62x39mm. This is true even of the lighter 6.5 Grendel bullets, and recoil only increases with the heavier bullets. Less recoil means that you can shoot more rounds in a day, and heavier recoil can often impact a shooter’s accuracy. However, since the 7.62x39mm is not a particularly accurate round, you might find that the extra recoil of the 6.5 Grendel is worth it, especially for applications in hunting.

Both of these cartridges are quite popular and readily available – but here, the advantage goes to the 7.62x39mm. This cartridge is about 60 years older than the 6.5 Grendel, and the ammunition is abundant since it is the only caliber available for the AK-47. On the other hand, the 6.5 Grendel is one of many calibers available for the AR-15, and it is still growing in popularity. While both are fairly readily available, there is a slight advantage to the 7.62x39mm, and this caliber is cheaper as well.

These two rounds are fairly similar in size. The 7.62x39mm is just a fifth of an inch shorter, and the two have essentially the same case length and capacity for propellant. They differ in the bullet diameter: the 7.62x39mm works with a .30 caliber bullet, as opposed to the narrower 6.5 Grendel. The 6.5 Grendel is also loaded to a higher pressure, which leads to it having a higher muzzle velocity.

The comparison of 6.5 Grendel to 7.62x39mm isn’t just a conversation about calibers. It’s really a debate between the AK-47 and the AR-15 – and that debate has avid proponents on both sides. If you are determined to shoot an AK-47, you probably already know that the 7.62x39mm is your only option. If you choose to go with the more powerful and more accurate 6.5 Grendel, you’ll be switching over to the AR platform.

The 6.5 Grendel has more energy, higher accuracy, flatter trajectory, and longer distance than the 7.62x39mm. This means it has better applications in hunting in addition to home defense. Still, the decision ultimately boils down to how and what you want to shoot. If you enjoy the raw power and chaos of the AK-47, the 7.62x39mm will continue to serve you well. If you want a more precise caliber that can function over long distances, go with the 6.5 Grendel.