The .45-70 Government and the .444 Marlin are both big bore cartridges frequently used in lever action rifles. This makes both of them good fits for hunting large game at close ranges in a lighter rifle. The .444 Marlin shoots a bit faster and a bit harder, but the .45-70 Government is more versatile, and more commonly used and therefore more readily available. We’ll analyze these calibers over a variety of key factors so you can determine which is the best fit for you. 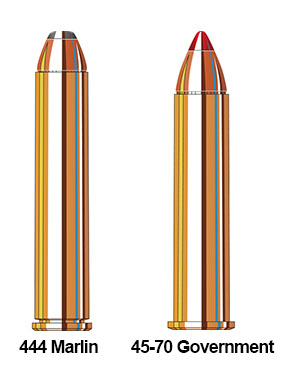 The following ballistics tables show a side by side comparison of the 444 Marlin vs 45-70 Government based on bullet weight and performance metrics including velocity, energy, usage and recoil.

Both of these cartridges have an effective range of about 150 yards. They are designed to pack a big punch up front, and are therefore less focused on maintaining speed past their effective ranges. A heavier bullet will also move less quickly than a lighter bullet, so the increased weight of the .45-70 Government hurts it here.

The trajectory of the bullet will impact your ability to place your shot accurately, which is crucial in hunting. While neither of these cartridges is meant for long distance, we do still see some significant dips in trajectory even within their effective ranges. Still, the .444 Marlin is able to shoot flatter than the .45-70 Government, as the heavier bullets of the .45-70 drag it downward very quickly. At 200 yards, you can expect a 265 grain .444 Marlin to drop 3.5”, while a 325 grain .45-70 will drop 6.5” at the same distance. Lighter options on the .444 Marlin will shoot even flatter, and heavier options on the .45-70 Government will drop faster.

While both the .444 Marlin and the .45-70 Government are good for just about any North American game at close enough ranges, the difference in available weights changes what each can be used for. The .444 Marlin is most commonly found in 265-280 grain bullets, though they can go as heavy as 335 grains. Meanwhile, the .45-70 Government can be purchased from 250 grains all the way to massive 600 grain bullets. This means that they are able to take a wider variety of creatures, even up to cape buffalo (though some hunters think it is a bit risky for such a tough game). You can get the .45-70 Government small enough for a close-range deer hunt, or big enough for just about anything in North America, and that’s not quite true for the .444 Marlin.

While the .444 Marlin is still in production, it was recently threatened by the dissolution of the parent company that had owned Marlin, its primary manufacturer. Now that Marlin has been purchased by Ruger, it seems the cartridge will stay in production. Still, the .45-70 Government is a more popular cartridge, and therefore more readily available from most major manufacturers. However, reloading components are quite readily available, as the .444 Marlin shares bullets (but not powder) with the more popular .44 Magnum.

Both of these calibers are most frequently found in lever action rifles. Lever actions provide a smaller gun that can be transported more easily across the backcountry, and are easy to handle and fast to shoot. The .45-70 Government can be chambered in both vintage rifles that take advantage of its black powder history, or modern rifles that are made for modern smokeless powder. Make sure you do not shoot smokeless powder bullets in a firearm that is meant for black powder .45-70 Government – this could do real damage. Because of the greater popularity of the .45-70 Government, you are more likely to find a wider variety of rifles chambered in it.

If you’re a handloader who already shoots .44 Magnum, the .444 Marlin might be a great way to expand your repertoire while using the very same bullets. The .444 Marlin also packs a bit more punch at comparable bullet weights, and shoots with a flatter trajectory. However, the .45-70 Government can be found from a variety of manufacturers in a variety of weights, making it a significantly more versatile and ultimately heavier-hitting cartridge.