The .30-06 Springfield and .45-70 Government are both excellent cartridges for medium to big game and have been used to take a variety of targets. While both are classic cartridges, the .30-06 Springfield has persevered as a popular hunting cartridge into modern times, while the .45-70 Government is seen as an older cartridge that is only used by a select few hunters today. Still, advancements such as smokeless powder over black powder have improved the .45-70 Government since its invention in the nineteenth century, and it can hold up to many modern cartridges. We’ll explore the differences between these calibers across several key factors to help you determine which is right for you. 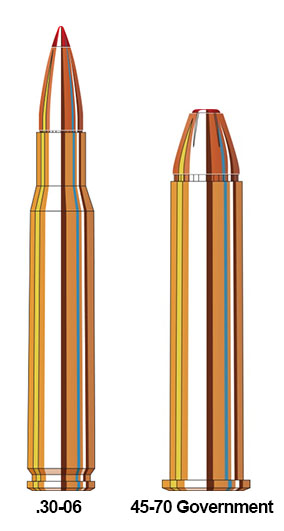 The following ballistics tables show a side by side comparison of the 30-06 vs 45-70 Government based on bullet weight and performance metrics including velocity, energy, usage and recoil.

The .45-70 Government is very effective within 150 yards, and somewhat effective out to 300 yards, but then drops off rather quickly. We will therefore compare ballistics inside of 300 yards. It’s also worth noting that we are comparing a 150 grain .30-06 Springfield against a 325 grain .45-70 Government; this is a significant weight difference, and a heavier bullet will not fly as quickly as a lighter bullet.

A bullet’s trajectory deeply impacts your ability to hit your target. While you may not be shooting the .45-70 Government over particularly long ranges due to its drop in energy, it is still important to compare even at short ranges and make sure that you are able to account for the difference.

The heavier bullets of the .45-70 Government translate into quite a bit more recoil over the .30-06 Springfield. Recoil impacts your ability to shoot your gun accurately, so make sure you are prepared for this extra recoil before investing in this caliber. Additionally, some shooters may not see the extra recoil as worth it, since we are not seeing corresponding additional force in the ballistics. Remember, while the energy might be comparable, the heavier bullets of the .45-70 Government may give you some advantage in taking big and tough game.

As we’ve already stated, the .45-70 Government is only effective within 150-200 yards, especially on larger game. The massive bullets of the .45-70 Government certainly provide the stopping power needed for this tough game at close ranges. If you’re hoping to shoot out to 500 yards and beyond, you’ll have to go with the .30-06 Springfield. However, if you’re planning to take large game such as moose and bear that often don’t call for longer distances, the .45-70 Government can certainly help you do the job.

The .30-06 Springfield is a classic cartridge and among the most popular big game hunting cartridges in use today. This means that you will find plenty of ammunition readily available from a variety of manufacturers, and it is relatively inexpensive. The .45-70 Government is not as ubiquitous, so you may need to call ahead to make sure you can find it while traveling, and you may have fewer factory choices for slightly pricier ammunition.

While there are several options for the .45-70 Government, the .30-06 is a significantly more popular cartridge. This means that you will be able to find a wider variety of rifles from more manufacturers chambered in .30-06 than .45-70. The .45-70 Government’s short barreled lever rifles will also be smaller than the standard/long action required for the .30-06 Springfield.

If you’ll be hunting inside of 200 yards – whether that’s because you’re targeting larger game such as moose and bear that are typically taken at these distances, or working in heavy cover to target deer, hogs, and more – the .45-70 Government can offer a bigger bullet in a lighter rifle with a historical feel while still helping you get that clean, ethical kill. If you want to shoot past 200 yards, the only choice is the .30-06 Springfield.