Designed relatively recently in 2011, and released to the market the following year Sturm Ruger introduced a popular, low-cost rifle suitable for a variety of hunting venues in the American Ranch Rifle. A lightweight, compact design, with a sturdy synthetic stock, along with Ruger’s reputation as one of the finest firearms manufacturers in the game created a sensation.

Offered in 13 different versions, the primary differences between each one is the size of the external magazine, which ranges from three to 10 rounds, the lengths of the barrel which is available in 16.10, 16.12, and 16.38-inch lengths, and the all-important consideration the caliber of the rifle.

In thinking of a classic “ranch rifle” images of lever-action Winchester, Spencer, and Henry rifles come to mind, but the Ruger design carrying this name is a smooth bolt-action variety, a style that Ruger excels in.

Designed with a scope in mind, the free-floating, 70-degree bolt clears the scope and mounts easily, allowing the shooter to remain on target without interference. The synthetic stock, available in traditional tan or camo patterns is durable, resilient, and function in a wide variety of temperature and climate conditions. This is a solid rifle, at a reasonable price.

Ruger included all the basic amenities you could ask for in a lightweight bolt-action rifle in the 26981 model. Marketed in 350 Legend caliber, with a five-round AR Style magazine, and a 16.38 barrel this is a very accurate rifle. A 1:16 right-hand twist ensures accurate bullet flight, and at 6.1 pounds, you’re not going to wear out packing it into the backcountry on long treks after big game.

This is a solid rifle, at a solid price. If you’re a fan of the 350 Legend caliber, this may be the one for you.

The Model 26985 is almost identical to the 26981 except in length. This rifle is considered a “compact” model since the overall length of 34.75 inches, and a weight of six pounds. That’s only 1 ¼-inches shorter than its standard-sized rival and just a couple of ounces lighter, but in the right situation, these seemingly insignificant disparities can make all the difference on a hunt.

At 5.5 pounds, and firing the 225-grain, 450 Bushmaster cartridge, this version of the American Ranch Rifle is going to kick, and kick hard. The rubber buttpad offered as standard issue by Sturm Ruger will help, but the energy of this cartridge, in a lightweight, 36-inch rifle is going to generate substantial recoil.

The benefits of this model come in that extra energy, especially at close range. Hog hunters use the 450 Bushmaster on big boars charging out of the brush just a few yards away, and this can be an effective close-range rifle if you’re ambushed by a grizzly during trail rides or on an elk hunt.

Made for the popular 7.62x39 caliber, this version of the American Ranch Rifle appears similar to other models of the bolt-action rifle, but the inner workings say something different. The five-round magazine is a Mini-Thirty style, in line with the 7.62x39 caliber on many other rifles. The twist is different as well, with a 1:9.5 right-hand versus the 1:16 right-hand on most other Ranch Rifle configurations.

Aside from those considerable differences, the length, length of pull, and weight are in close proximity to Ruger’s other offerings in this rifle.

Ruger designed this version with the varmint hunter in mind. With an ample 10-round magazine, this bolt-action beauty in 5.56 caliber is perfect for coyotes, fox or maybe just plinking away at burrowing rodents. The AR-style magazine extends below the rifle a few inches lower than competing models with smaller capacity, but in lightweight 5.56 cartridges, the balance isn’t affected much by a full magazine.

The twist is different than the heavier caliber models at 1:8, right-hand. At 6.1 pounds, the recoil from the 5.56 cartridges is insignificant.

Sturm Ruger responded to the challenge presented by military and law enforcement agencies for a higher-powered cartridge at short to medium distances than the 5.56 NATO could deliver. The 300 Blackout was the result and Ruger added this emerging cartridge to its American Ranch Rifle line. The Model 26968 operates on the same platform as the other Ranch Rifles with a different twist, a 1:7, right-hand than competing models.

Arriving with a 10-round, AR-Style external magazine, and a 16.12-inch barrel, the Model 26968 delivers the higher-powered .308 cartridge on target for those that want a larger caliber in a similar AR platform.

The 6.5 mm is the latest rage in all types of hunting. From coyotes to mule deer, the 6.5, with its high velocity, high-powered, flat-shooting characteristics is a challenge to traditional calibers across the world. Ruger entered the fray with a 6.5 Grendel version of their American Ranch Rifle.

The 16.1-inch barrel and 36-inch overall length stock with a weight of around six pounds is perfect for the varmint hunter who likes to take the game to the predator. It works equally well for pronghorn, hogs, and both whitetail and mule deer. With a 10-round capacity, you can load it in the morning and shoot all day when out after coyotes, or fox.

The 450 Bushmaster cartridge is the most powerful round available in several models of the Sturm Ruger American Ranch Rifle. This time it's packaged in an attractive camouflage pattern synthetic stock that resembles the vegetation in a cattail swamp. While the look is different than other models of the Ranch Rifle, the performance is the same.

The Model 16978 has a three-round, external magazine, a 16.12-inch barrel, an overall length of 36-inches, and a modest weight of 5.5 pounds. That light weight, despite a quality rubber buttpad, can create tremendous recoil, so shooter’s flinch is a real possibility if you’re not ready for the shock of a heavy cartridge fired from a light gun. 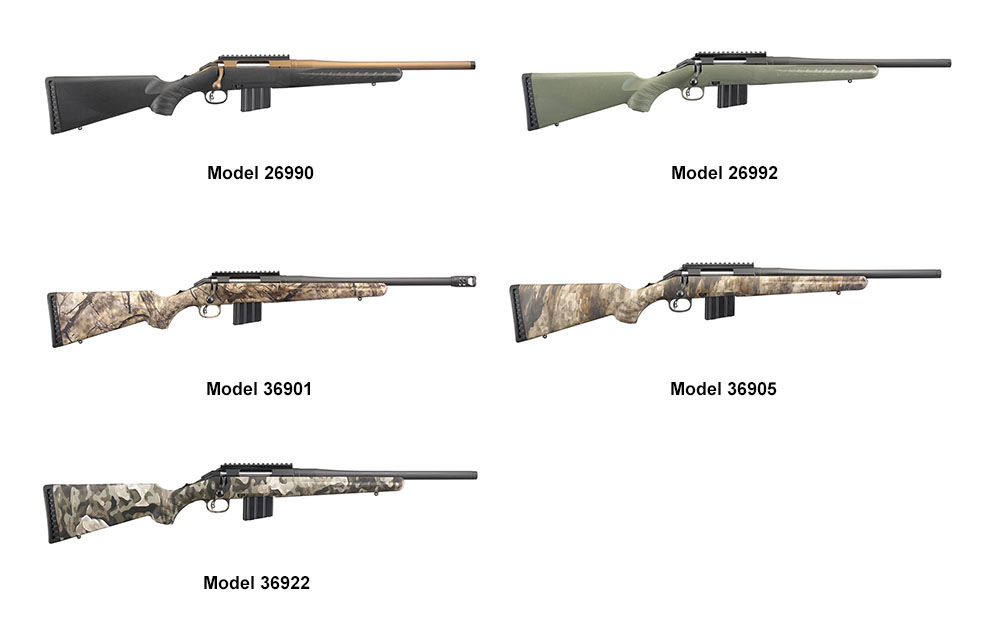 Sometimes the only difference in various models of a rifle is appearance. That is the case with the five versions of the models listed above. Each model has the same 16.38-inch barrel, they all weigh 6.1 pounds, and the twist is identical at 1:16, right-handed. An overall length of 36-inches, a 13.75 in pull, and a five-round external AR-Style Magazine define all of them. The difference comes in the finish.

The 26990 has a standard black synthetic stock with a Burnt Bronze Cerakote finish. The 26992 is moss green synthetic with a black matte finish, and the 36901 model has a flashy Go Wild Camo Brush Synthetic stock with a Matte Black finish: The final two models, the 36905 is slightly different with an overall length of 36.37, about a third-of-an-inch longer, and a weight of 6.3 pounds, roughly three ounces heavier. The final model, the 36922 features an Anywhere Camo Synthetic stock with a Black Matte finish with an overall weight of 6.1 pounds. All of these models chamber the 350 Legend cartridge.