Most of us didn't start hunting with deer, elk, moose, or pronghorn. If you're like me, the adventure began with a .22 rifle, maybe a single-shot 20-gauge shotgun or something similar, and red squirrels, rabbits, doves, grouse, or perhaps quail.

Small game is the best way to train a youngster in the ways of ethical hunting. Choosing the perfect gun for small game hunting is part of the process.

The first gun I shot was anything but small. I was eight years old when I pulled the trigger on a 12-gauge shotgun on my grandpa's farm. The recoil launched me back into their Granny Smith apple tree, but though I was a bit stunned, it set me on the path.

A more likely choice for a youngster is a .22, maybe a .17, or perhaps a .410 or 20-gauge shotgun. Revolvers or pistols in .22 long rifle are great for older small game hunters, but kids should start with a long gun.

What is small game?

As a general rule, if you take two guns of the same caliber, the larger and heavier gun is going to have less recoil. I know it sounds counter-intuitive, but the weight of the larger gun is going to provide more inertia for the round and expanding gases pushing back on the gun to overcome. So, if you take the same gun in two different calibers, typically the larger caliber is going to have more recoil. This balance between weight and size versus caliber are factors to weigh when deciding to carry. I often get students who have been sold an Airweight .357 Ladysmith or other J-Frame revolvers and they don’t like to shoot them. It hurts their hand. When I hand them my 6-inch barrel Model 66, they really don’t want anything to do with that large of a gun, thinking the bigger the gun, the bigger the bang. But they are amazed at how much more manageable the recoil is with the larger gun, shooting the same cartridge. 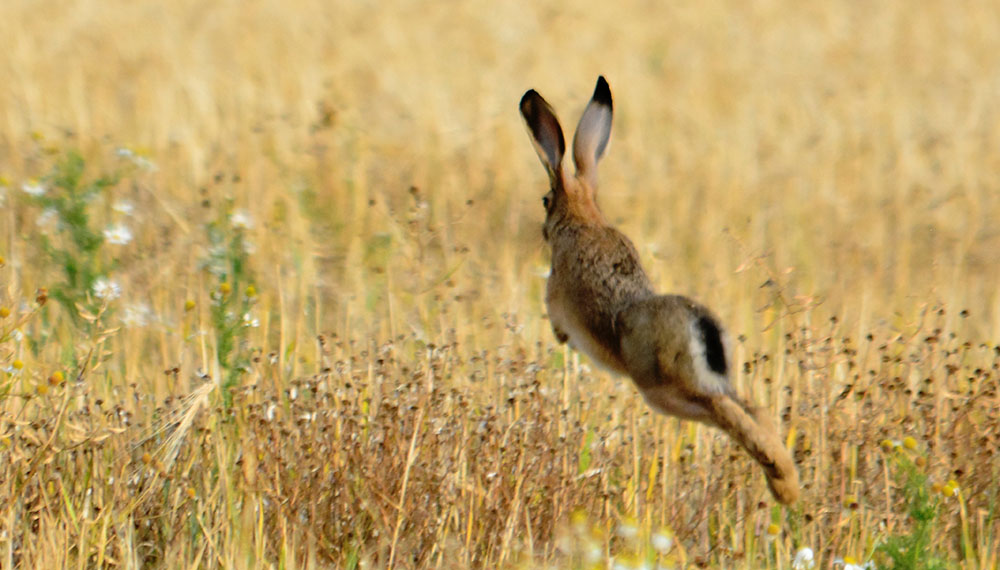 While some consider migratory waterfowl in the same small game category, they're federally regulated since they fly across state boundaries and most of the time international ones as well with many making the trek from Mexico to Canada and back with each passing season.

Selecting the perfect gun for small game hunting is a challenge with so many different varieties of birds and mammals to pursue, but there are a few things to consider, and we’ll walk you through the process.

Which type of gun is best for small game?

With big game, regulations are specific on which calibers are legal to harvest a deer, elk, moose, or pronghorn. The general ethical rule is to deliver 1000 foot-pounds of energy when the bullet hits the animal. There are no regulations on calibers or ethical considerations on energy for small game aside from being close enough to have a shot deliver fatal force. 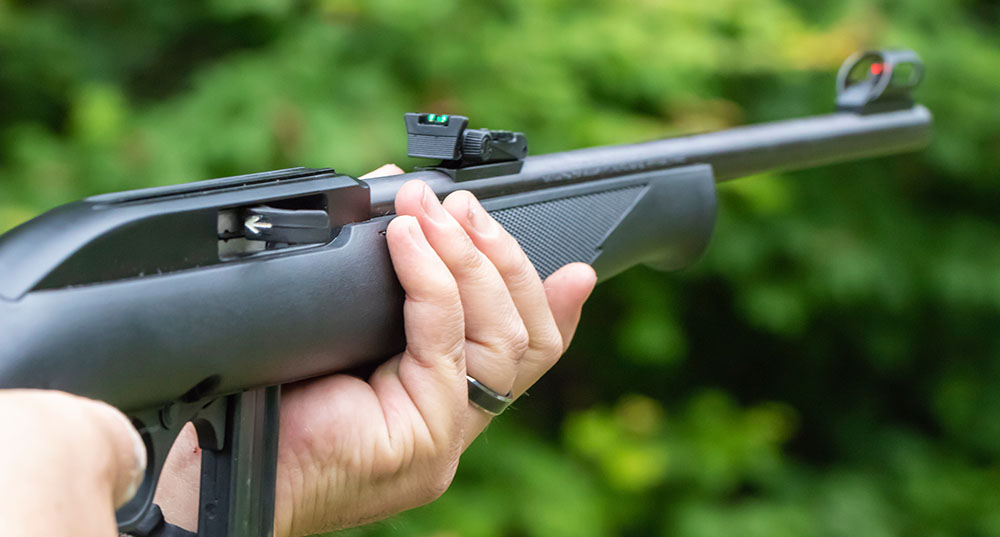 The general breakdown for small game guns to consider are shotguns, handguns, and small-caliber rifles. In the long history of man hunting small game, it was only recently that firearms replaced the sling, the slingshot, and the bow and arrow as the primary methods of hunting small game.

We’ll look at specific species, and the type of gun that works, or has worked best in the past in harvesting these birds and animals.

The shotgun as a small game platform

I'm the proud owner of my grandfather's 20-gauge Harrington and Richardson single-shot shotgun. I'm a little prouder of this simple, single-shot gun being able to provide for his family through the dark days of the Great Depression and into the 1970s. He took innumerable squirrels, rabbits, raccoons, quail, ducks, and geese with this venerable gun, and even harvested a couple of whitetail deer firing slugs through it. 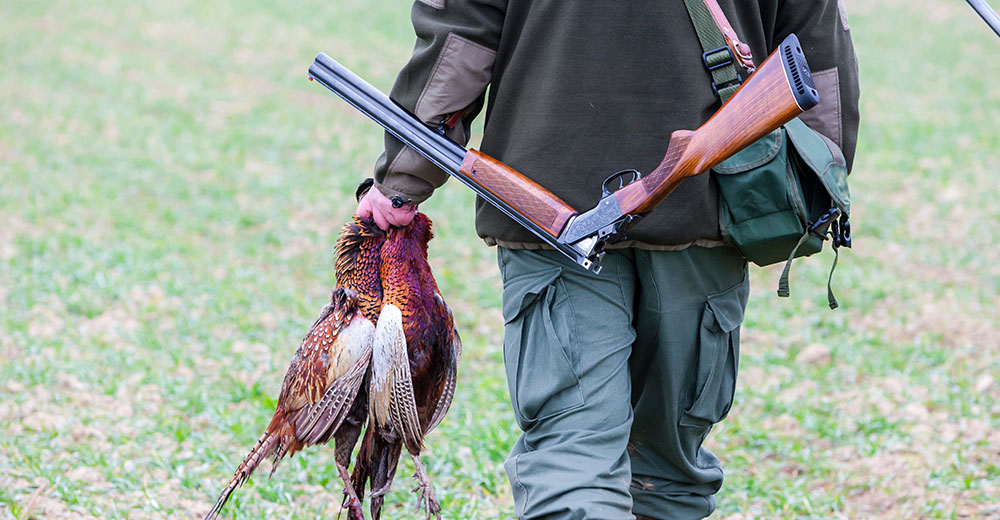 A shotgun can give you a great advantage with small game. Small game in heavy cover is often difficult to hit. A shotgun with the correct load of pellets will take darting squirrels in high branches, cottontails doing the zig-zag through brush, and raccoons caught in the flickering light of a carbide lamp in the middle of the night.

They’re reliable, great to distances of 40 yards or so, and deliver the firepower to take down any sized small game. A 12-gauge might be too much firepower for small game, but a 20-gauge or .410 is often perfect.

The only caveat with a shotgun is that sometimes the small game is peppered with pellets. I remember a dinner of fried squirrel my grandmother made and biting down on lead pellets occasionally. Lead isn’t that bad, but you can break a tooth with modern steel shot when you’re dining on wild duck or goose.

The small-caliber handgun as a small game platform

The handgun isn't everyone's gun of choice in small game hunting, but a .22 revolver or pistol can be a lot of fun out in the woods. Squirrels are harder to take with a .22 handgun and require a bit of patience, a steady hand, and a good rest to hit one, but when you do, you've bagged one of these bushy tailed rodents and can drop them into the game bag in the back of your hunting vest. 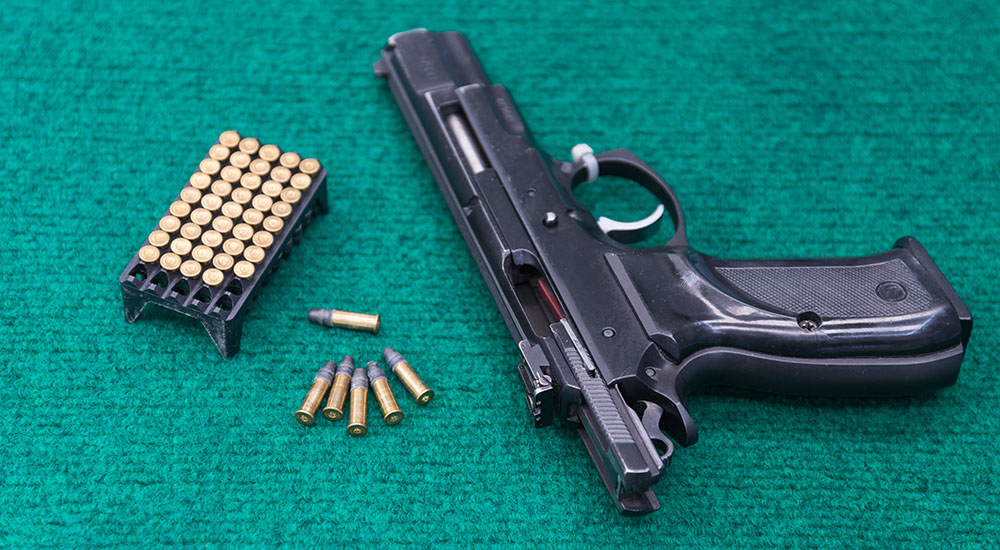 Semi-automatics don’t seem to fit the realm of small game hunting, but you’d be hard pressed to find a better .22 caliber handgun than a heavy barreled, bull nosed Ruger target pistol. We've taken a few rabbits with my dad's out on the Wyoming prairie. They're accurate, easy to aim, and have a nearly flawless action.

My grandpa carried an old .22 revolver. It's so worn that we can't determine who the manufacturer was, we just know he purchased it around 1918, and it's still in the family. The exterior is worn, but it still shoots straight and handles .22 long rifle cartridges just fine.

The small caliber rifle as a small game platform

In the greater shooting distances found on the prairie, foothills, and mountains of the Midwest and Rocky Mountains the .22 long rifle, the .17 HMR, and even the .204 centerfire are king. Let's take a look at each one separately since this is the platform most small game hunters choose when hunting rabbits, squirrels, or raccoons. They're also popular with small game that you don't often eat like fox and coyote.

If you didn’t first go hunting with a .22 rifle, you’re out of the norm. This is the gun that nearly every hunter begins their lifelong passion with. The venerable .22 was first introduced in 1857 in the .22 short cartridge. This was the first all metal cartridge on the market, and it was an immediate hit.

First offered in a revolver, it quickly moved to rifles, and the trend has never stopped. .22 shorts are hard to find these days, and longs aren’t exactly easy either, the .22 long rifle has taken the stage as the most fired cartridge in America, with millions produced each year. The .22 rifle is made by dozens upon dozens of American manufacturers and a popular foreign model produced for the American market as well.

The .22 long rifle is inexpensive, costing just a few cents per round to fire, and it is effective at ranges to 200 yards on small game.

Its close cousin, the .22 magnum, is another popular version of the .22 with just a little more bang in its delivery.

A fast mover into the .22 market, the .17 HMR is a favorite among small game hunters. It shoots flat at 100 yards and has velocity that's hard to beat in a rimfire cartridge. 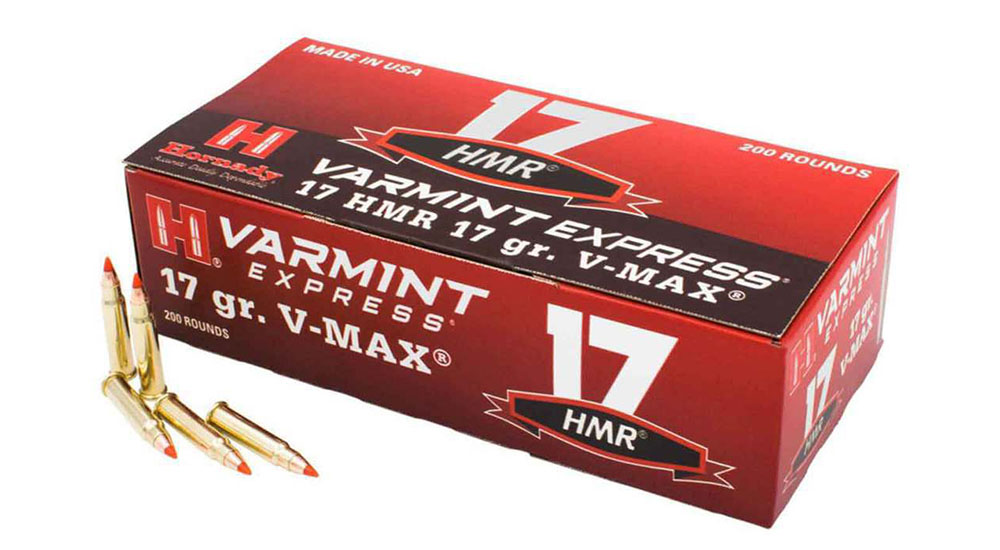 The .17 HMR has remained available at sporting goods stores, and in online ammunition stores regardless of the shortages that have plagued the .22 long rifle ammunition supply.

A .17 HMR has almost no recoil, has the power to drop any small game and is a very fast, very accurate round for a rimfire cartridge.

I have a .17 HMR and now rarely use my venerable Coast to Coast model .22 bolt action or even my Ruger .22. The .17 HMR I own is a bolt-action, that is so accurate we sometimes have target practice at 100 yards, shooting the necks off wild sunflowers growing along our hayfields. It is a welcome addition to the world of small caliber shooting.

The smallest widely available centerfire cartridge on the market after the centerfire version of the .17, the .204 is an incredible round for rabbits, prairie dogs, squirrels, coyotes, and fox. With a muzzle velocity in excess of 4,000 FPS on many cartridges, it is blazingly fast. Pull the trigger, and targets at a quarter-mile seem to explode instantaneously.

The .204 is pricier to shoot than the .22 long rifle or .17 HMR, but the range and velocity are unheralded. The .204 is the cartridge of choice for many fur hunters after the lush winter coast of coyote, fox, and bobcat. With very little recoil, there is no excuse for shooter's flinch and you can easily hit small game at 400 yards or farther if you have a good eye and a steady hand.

Few people argue about its effectiveness once they’ve had the chance to fire one.

Rifles and pistols don’t work for upland game birds or waterfowl and aside from turkey’s are illegal to hunt with. In many states, you can harvest a turkey with any style of gun you carry. That's not true with pheasants, grouse, and quail which must be taken with a shotgun.

Coon hunters, lion hunters, and trappers rely on small caliber pistols, rifles, and revolvers in their pursuit of these animals. A small caliber gun won't ruin the meat, and there isn't that much on small game to waste.

A final note from my childhood. One night my dad, grandpa and great uncle took me on a coon hunt with a howling pack of Redbone and Bluetick hounds through the woods of eastern Arkansas. They treed a half-dozen coons that night, but only harvested one. The next day my grandmother introduced us to barbequed raccoon. My mom refused to eat it and so did my little sister, but I dug right in. It was a little greasy, but not much different than the dark meat on turkey, with maybe a hint of pork. It was my only chance at this unique cuisine, but it was memorable.

There is a lot of be said for the delicate flavor of small game prepared correctly.