Ballistics Performance Comparison of 5.56 vs .223 Cartridges

When looking for a small caliber, high velocity round, many firearms enthusiasts turn to the 5.56 NATO and .223 Remington. Many beginning shooters see these calibers as interchangeable, thanks to their similarities in size and properties. However, there are key differences between these two cartridges. 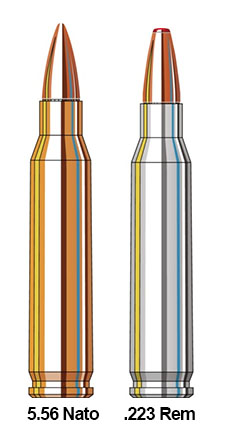 The ballistics table below shows a side-by-side comparison of the 5.56 NATO against the .223 Remington. We will analyze velocity, energy, usage, and recoil based on bullet weight.

High velocity is one of the most appealing factors of either the 5.56 NATO or the 2.23 Remington. Velocity impacts trajectory and accuracy, and ensures a clean, ethical kill when used in sporting applications.

Bullet energy is crucial for hunting: this creates the stopping power necessary to bring down your target. The .223 Remington again has an advantage here, with higher energies at every distance and at the muzzle. Once again, the difference between the two decreases at greater distances, with the .223 Remington coming in at 296 ft-lb at 500 yards, and the 5.56 behind it by just 27 ft-lbs at 269 ft-lbs at the same distance.

Even though the .223 Remington has higher energy, the 5.56 NATO is loaded to a higher pressure. This can be tough on your firearm over the course of its life. The 5.56 NATO has a .125” longer throat, which allows for approximately one extra grain of powder to be loaded into it, which helps account for the extra pressure.

A bullet’s trajectory plays an important role in the shooter’s ability to hit a target. The 5.56 NATO will likely drop about 3” at 200 yards, and goes up to 11.25” of drop by 300 yards. The .223 Remington will drop 4.2” at 200 yards. From this, we can see that while the .223 has greater velocity, the 5.56 has a flatter trajectory over longer distances, which may be important for hunters and long-range shooters.

The 5.56 NATO and the .223 Remington are extremely close in price, but the 5.56 NATO is generally just a bit cheaper. In general, the price difference will not be a factor in comparing these two rounds. However, if you are doing target practice or other activities that cause you to go through a very high volume of rounds, it may start to make a difference for you. Both rounds are usually found quite cheaply compared to other ammunition. The 5.56 can be a little easier to find than the .223, but generally both are readily available.

The sizes of the 5.56 NATO and .223 Remington are extremely similar. This leads many people to believe that they are interchangeable: that a rifle chambered for 5.56 NATO can shoot .223 Remington, and vice versa. However, 5.56 is loaded to a much higher pressure than .223 – so their chambers are built to withstand this pressure, while 2.23 chambers are not. While it is possible to shoot 5.56 ammunition out of a .223 chamber, some rifles may create dangerous amounts of pressure when doing this. It is possible that the rifle could explode, though more likely that the primer will be blown out.

It is safer to shoot .223 out of a 5.56 chamber, but it will still not get you the best performance. This is particularly true if you are using a bolt action rifle chambered for 5.56 NATO. If you are on the AR-15 platform, you may have difficulty with a 5.56 NATO rifle being set up for higher recoil and pressure, so they will not work as well with .223 as it does not have the power necessary to cycle properly.

If you are interested in shooting both of these calibers from the same firearm, the .223 Wylde is a barrel specifically designed to shoot both safely without sacrificing performance. It is a hybrid rifle cartridge with the angling of a 5.56 NATO chamber, but a smaller freebore diameter that lends greater accuracy when shooting the .223 than a traditional 5.56 chamber.

The 5.56 NATO is a higher pressure round, and has been used by the US military. The .223 Remington is lighter, which gives it less stopping power on impact. However, the .223 Remington also travels at a higher velocity. Determining whether velocity or weight and pressure are most important to your shooting needs will help you decide between these two fine calibers.