- Get FREE Standard Shipping on Orders Over $49 -
Skip to content

While the .45-70 Government has been a staple of big game hunting since the nineteenth century, the .450 Marlin is newer to the scene and less known to hunters, even though they share many characteristics. The .450 Marlin improves on some of the .45-70 Government’s ballistics, offering a very similar bullet that shoots a bit faster and harder, and can be used safely with factory loads in any rifle chambered for it. In order to understand the differences between these two very similar calibers, we’ll analyze several key factors to help you decide which is the best fit for you. 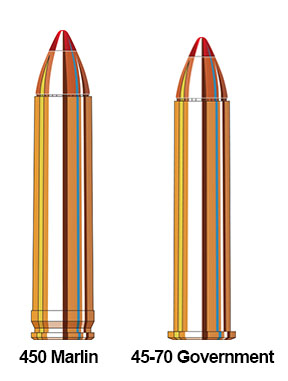 The following ballistics tables show a side by side comparison of the 450 Marlin vs 45-70 Government based on bullet weight and performance metrics including velocity, energy, usage and recoil.

With very similar ballistics and similar weights, it’s not a surprise that the .450 Marlin and the .45-70 Government have similar levels of recoil. However, the .450 Marlin grabs a bit of an advantage here as well, impressive considering it is hitting with more energy at the other end of the rifle. The difference in recoil is small enough that it may vary based on the rifle used and the perception of the shooter, but the advantage does go to the .450 Marlin here. Both calibers have a fairly significant recoil that you will need to learn to manage in order to shoot the gun accurately.

Because both of these calibers have such similar ballistics, they also have very similar applications. Both are most commonly used in lever action rifles for big game hunting at close ranges (within 100-150 yards). This means they are well-suited for hunting in thick woods or other cover, or as bear defense guns. The range of bullet weights makes them more versatile for hunting smaller and larger game within these close ranges, but neither is appropriate to hunt anything outside of 200 yards.

The .45-70 Government can be purchased in modern smokeless powder loads, or in black powder loads that replicate its historical roots. The black powder loads are significantly less powerful than what we have analyzed here, and you should never shoot a modern smokeless powder load in a vintage rifle meant for black powder. While the .450 Marlin does have ballistic advantages, the .45-70 Government has a long, established history and is already in use by many hunters. This means its ammunition is much more readily available; if you switch to .450 Marlin, you’ll have scant options in terms of brands and in-store availability at retailers. However, both are good for handloaders as reloading components are readily available.

Looking at ballistics, it’s clear that the .450 Marlin does everything the .45-70 Government does just a little bit better. It avoids the issue of unwitting shooters loading modern loads into vintage rifles and causing catastrophes, while shooting the same bullets just a bit harder and faster. But if we zoom out to look at the industry as a whole, the .450 Marlin has not offered enough of an improvement over the .45-70 Government for most hunters to justify making the switch, meaning it is far more of a niche cartridge with fewer ammunition and rifle options available.