Lever action rifles offer a light, fast-handling option for many hunters, and the .30-30 Winchester and .45-70 Government are two top options for lever action rifles. While both can be used on medium and large game to a certain extent, the .30-30 has a longer range for deer, while the .45-70 has more stopping power on larger game taken at close quarters. While these two calibers have similar limitations on their shorter effective ranges, they do have key differences that may make one a better fit for your unique hunting needs. 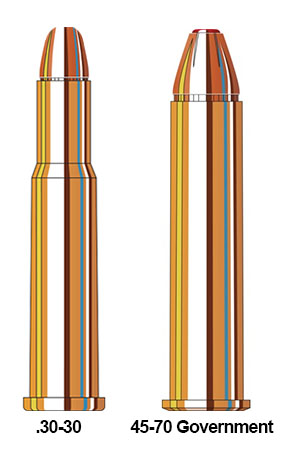 The following ballistics tables show a side by side comparison of the 30-30 Win vs 45-70 Government based on bullet weight and performance metrics including velocity, energy, usage and recoil.

Recoil impacts your ability to shoot your gun accurately and to shoot a second round quickly, which can be important in a defense scenario. The .45-70 Government has a significantly stronger recoil than the .30-30 – about twice as much. The heavy bullets of the .45-70 give it greater energy, but this goes both ways, and knocks into your shoulder just as it hurtles its big bullets through the air.

Neither of these cartridges is appropriate to shoot at long ranges. The .45-70 Government is most effective inside of 150 yards. If you want to hunt out to 200-250 yards, you’ll need to use the .30-30 Winchester. This makes the .30-30 Winchester generally more appropriate for deer, where you might need to maintain some distance. However, the significantly increased energy and serious bullets of the .45-70 make it a better option for large game, such as bear or moose, which can be taken at close ranges. The 45-70 also makes for a nice, light bear defense weapon.

Both of these cartridges are reasonably popular and shouldn’t be too difficult to find. However, they are not quite as ubiquitous as more popular cartridges such as the .308 Winchester, and may be easier to find in some regions than others. The .30-30 Winchester is generally a bit more popular and readily available than the .45-70 Government, and its ammunition is quite a bit cheaper – after all, you’re paying for a good hunk of metal with the .45-70 Government. However, if you are primarily using the ammunition for hunting, you will go through so few rounds that it may not make a huge difference.

The .30-30 Winchester is easier to integrate into your handloading if you already hand-load .308 Winchester. Since they use the same diameter bullets, stocking up on supplies is simplified in terms of projectiles. The .45-70 Government will require its own unique projectiles, which won’t deter a determined handloader but can add additional hassle.

The .30-30 Winchester and the .45-70 Government are both popular in lever action rifles. These smaller rifles are easy to maintain, fast to set up, and a nicer fit for trekking through the backcountry or maneuvering in a deer stand. The .45-70 dates back to the 1800s, so there are plenty of black powder options and vintage rifles available in this cartridge. Just make sure you don’t shoot modern ammunition in a vintage rifle – that’s a quick way to ruin your firearm or worse injure yourself.

If you’re hunting inside of 150 yards and want the stopping power that only a big bore cartridge can offer, the .45-70 Government is the way to go. This caliber shines for big game hunting in close quarters, whether that’s moving through the thick woods or planning for bear defense. If you’re looking to shoot more in 200-250 and want to focus more on medium game such as deer, the .30-30 Winchester will offer less recoil and longer ranges.