The .257 Roberts and .243 Winchester are both versatile cartridges that can straddle the line between small game and deer cartridges. The .257 Roberts has heavier bullets and extra energy that can make it a better bet for big game, while the .243 Winchester is more reliable on small and medium game. However, the .257 Roberts is also difficult to find, and the wider selection and availability of the .243 Winchester might be enough to tip the scales. In this guide, we’ll dissect the performance of these two calibers across a number of important factors so you can decide which caliber best suits your unique hunting needs. 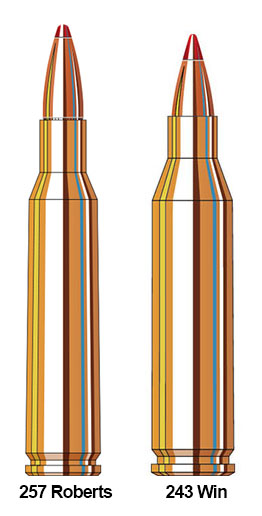 The following ballistics tables show a side by side comparison of the 257 Roberts vs 243 Winchester based on bullet weight and performance metrics including velocity, energy, usage and recoil.

If a heavier bullet slows down velocity, the payoff is that it ramps up energy. The heavier .257 Roberts does have a bit of an edge here over the .243 Winchester, and this extra energy can help it especially as a deer cartridge. Out of the muzzle, the .257 Roberts has an extra 115 ft-lbs of energy over the .243 Winchester. By 300 yards, that advantage is holding fast at 113 ft-lbs. At 500 yards, it’s down just a bit to 101 ft-lbs.

Both of these calibers are considered fairly mild-shooting, especially in the world of deer hunting calibers. They have highly comparable recoil energies, though the .257 Roberts offers just a bit less recoil. This might be surprising, as the .257 Roberts also generally comes with heavier bullets and more energy. Still, the difference is slight enough that it is likely not worth making the decision between calibers on recoil alone.

The .243 Winchester is lauded as one of the most versatile cartridges on the market. It can be purchased with 55-grain bullets for varmint hunting, or 100-grain bullets ready to take on medium game like whitetail. While it can take large game like elk at close distances, it’s not ideal for these purposes. The .257 Roberts is also an excellent “all-around” cartridge, as it works well for deer, hog, and smaller game. The extra energy and weight of the .257 Roberts means it can do a bit better on larger game than the .243 Winchester, according to some hunters.

The .257 Roberts is a lesser known caliber, and is therefore not as available as many other calibers. It is also more expensive, though this varies based on the manufacturer. There are also slimmer choices available for firearms chambered in .257 Roberts. Still, there are handloaders and advocates hoping to resurrect the .257 Roberts, and you may be able to find a used firearm from a discontinued line chambered in it. Be careful when selecting a used firearm and make sure it has been quality tested by a trusted gun dealer, as accidents have occurred with faulty used weapons.

Many hunters prefer a solid all-around cartridge, particularly if you are investing in just one rifle that you hope to use for many purposes. If you’re looking for calibers that can be used on small and medium game to great effect, both the .243 Winchester and the .257 Roberts will be excellent choices. If you want to take down larger game as well, the extra energy of the .257 Roberts will give you a much easier time stopping targets above the size of a deer. However, the trade-off is that the .257 Roberts is not widely available: you may need to find a used gun dealer you trust to purchase a discontinued model from your favorite manufacturer, or learn to handload in order to get consistent access to your cartridge. The wider availability may be enough to push some shooters into the .243 Winchester, but ultimately it is up to personal preference and what your hunting needs and knowledge are.