The .17 HMR (Hornady Magnum Rimfire) and the .22 WMR (Winchester Magnum Rimfire) are two high-powered rimfire cartridges that bring an extra punch thanks to their magnum status. Still, there are important differences between the cartridges: if you’ll be varmint and especially predator hunting, the .22 WMR has a heavier bullet that might give you more stopping power. On the other hand, the .17 HMR is ideal for plinking and target practice. We’ll go through the differences between these two calibers across several key factors to help you decide which is best for your unique hunting needs. 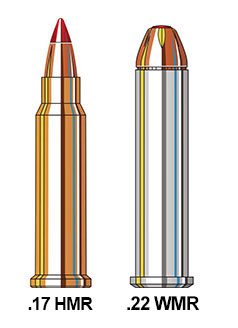 The following ballistics tables show a side by side comparison of the 17 HMR vs 22 WMR based on bullet weight and performance metrics including velocity, energy, usage and recoil.

The .17 HMR has the advantage when it comes to velocity, though it is worth noting that it is flying a bullet just over half the weight of the .22 WMR. Out of the muzzle, the .17 HMR has an advantage of 350 ft/s over the .22 WMR. However, both of these calibers start to lose that velocity very quickly, and indeed it cuts nearly in half by the 200 yard mark. At 100 yards, the .17 HMR’s advantage has grown to 448 ft/s, and at 200 yards, it’s still flying 353 ft/s faster as these small calibers leave their effective range.

The heavier bullet of the .22 WMR might slow it down in velocity, but gives it higher energy and more stopping power over the .17 HMR. Out of the muzzle, the .22 WMR is packing 77 ft-lbs more energy than the .17 HMR. But, by 100 yards, that advantage is down to just 4 ft-lbs as both calibers lose energy fast. At 100 yards, the .17 HMR has an advantage of 2 ft-lbs, but sitting at 72 ft-lbs and 70 ft-lbs, we’re not really seeing enough energy to take down a target at this range. Keep in mind that heavier bullets bring more energy: while you won’t be able to get too much heavier than the 17-grain .17 HMR used in our comparison chart, you can generally find .22 WMR with bullets as heavy as 50 grains, rather than the 30 grain option we’ve analyzed here.

The .17 HMR offers a flatter trajectory than the .22 WMR. It rarely rises more than 5” within a 200 yard shoot, while the .22 WMR has to rise about 8” over 200 yards. The aerodynamic bullets of the .17 HMR and their lightness contribute to them flying more flat than the .22 WMR, and the also have better resistance to windy conditions. This can help you to hit your target accurately without having to correct too much for gravity and weather.

These are light calibers, and they come with light recoils. Basically any shooter, even recoil shy or beginning shooters, will likely be able to handle the recoil presented by either the .17 HMR or the .22 WMR. Still, the heavier bullets of the .22 WMR do give it a bit more recoil energy than the .17 HMR – technically, it can even produce double the recoil energy. While the word “double” might sound intense, we’re talking about such light recoil that it’s still not much of a kick. While the .17 HMR does technically have an advantage here, it’s not really noticeable enough to be a deciding factor.

These are very small, light calibers, which means they are not suitable for a wide variety of game. Many hunters see both the .17 HMR and the .22 WMR as capable of taking very small game such as groundhogs and other pests that might appear in your backyard. However, if you want to take creatures such as coyotes, you’ll need to stay well within 100 yards for the .17 HMR to do the job. .17 HMR bullets fragment when they hit the target, meaning their penetration is shallow and they are thus not adequate for anything large or thicker-skinned.

The .17 HMR bullets have a better ballistic coefficient than .22 WMR, this means that there will be less drift in the bullet’s flight path. This translates to better accuracy and smaller groups at the end of the round’s effective range, which also means a higher chance of hitting a smaller target area like the head of a prairie dog or squirrel.

The .22 WMR offers better penetration than .17 HMR making it a better option for dealing with small game or pests. The heavier projectiles retain slightly more energy @ 100 yards which allows for it to be more effective on coyotes despite having a 1.5-2 MOA accuracy.

The .22 WMR has been around a good deal longer than the .17 HMR. This means that there are plenty more ammunition and rifle options for the .22 WMR than there are for the .17 HMR. Still, both are fairly available from many major manufacturers – it’s not like the .17 HMR is particularly hard to find. The .17 HMR used to be more expensive than the .22 WMR when it first hit the market, but now they can be found for comparable prices.

The .17 HMR offers a faster- and flatter-shooting bullet. However, it is so light that it’s difficult to plan to take out much of anything with this caliber past 100 yards. The .22 WMR offers comparable (if slightly lower) ballistics with a heavier bullet that can stop game. If you’re interested in plinking and target shooting with a more accurate caliber, the .17 HMR might be the best choice. If you’ll be hunting game, and especially larger game up to coyotes, then the pick will have to be the .22 WMR.